Searching the decision tree of brewing knowledge.
HOME/ About/
Aug 25, 2020

This beer came out great. It was originally supposed to be a normal take on the Kentucky Common style, but the brew store was out of flaked corn the day I went in to get ingredients. That also happened to be the day before I intended to brew the beer so there wasn’t any room to source the corn. Instead, I grabbed flaked rye and ended up with this beer slightly to the left of a normal KY Common.

It’s roasty and toasty with a good rye character. The head retention is amazing, and clarity is divine.


Kilt Remover 2016
Heritage -------- A long time ago in a brewhouse far, far away there was a brewer that wanted to make a big beer. He found a recipe for a scotch ale that promised much and delivered more. The partial mash recipe called for pounds on pounds of 2-row and a grain bill that would look fairly normal to an all grain brewer by itself. That beer was to be called `Kilt Remover`_ and it would be remade many times. This is the continuation of that beer's legacy. New takes --------- The original beer was a partial mash recipe and every remake has been an all grain take on that recipe. This is no different, but will be a bit closer to the original. Many of the remakes overstated the cloying crystal malts. While those are important flavors, I think that they need to be understated in a beer the size of $Texas. One great thing about pausing for a few years and coming back to this beer is that I now have a much better equipment setup to handle production. Yeast starters were never a thing that were a priority before so I would just use multiple packages of yeast. The first beer actually did have a 1L starter and that probably contributed greatly to its success. This run through, I've got a nice 1L starter setup. Packaging --------- Big beers and carbonation always seem like a high stakes experiment that has too big a chance of going wrong. I'm thinking this run will be the one that finally prompts me to get a counter-pressure filler. It's been quite a while since I've sanitized two cases of bottles to package, but I'll look forward to it as a fun throwback. Recipe ------ .. raw:: html .. _Kilt Remover: https://flagonslayer.wordpress.com/recipes/kilt-remover-scotch-ale/
May 30, 2016

I’ve always found the reactions to a brewing novice asking about creating a macro clone to be quite interesting. The one thing that I almost never see is a suggestion to make a cream ale, though I do see cream ales as kits fairly often. I’ve found myself wanting as much quaffable beer as I can possibly gather going into the summer. I suspect that I’ll have to turn that around and start thinking about the things that will go into those kegs once the quaffing season is over. Until then, I thought a cheap cheap cream ale would do the trick nicely.

This was probably my first batch of beer comfortably made by the Brewer’s Friend calculations from start to finish. I was thankful for my 20 gallon kettle when I collected all of the wort, but my end efficiency really did hit the nail on the head. I collected 6 gallons of 1.053 OG wort. As I thought with previous batches, my brewhouse efficiency seems to be around 72-75%. I had a beautiful hot break, and super clear wort after all was over. 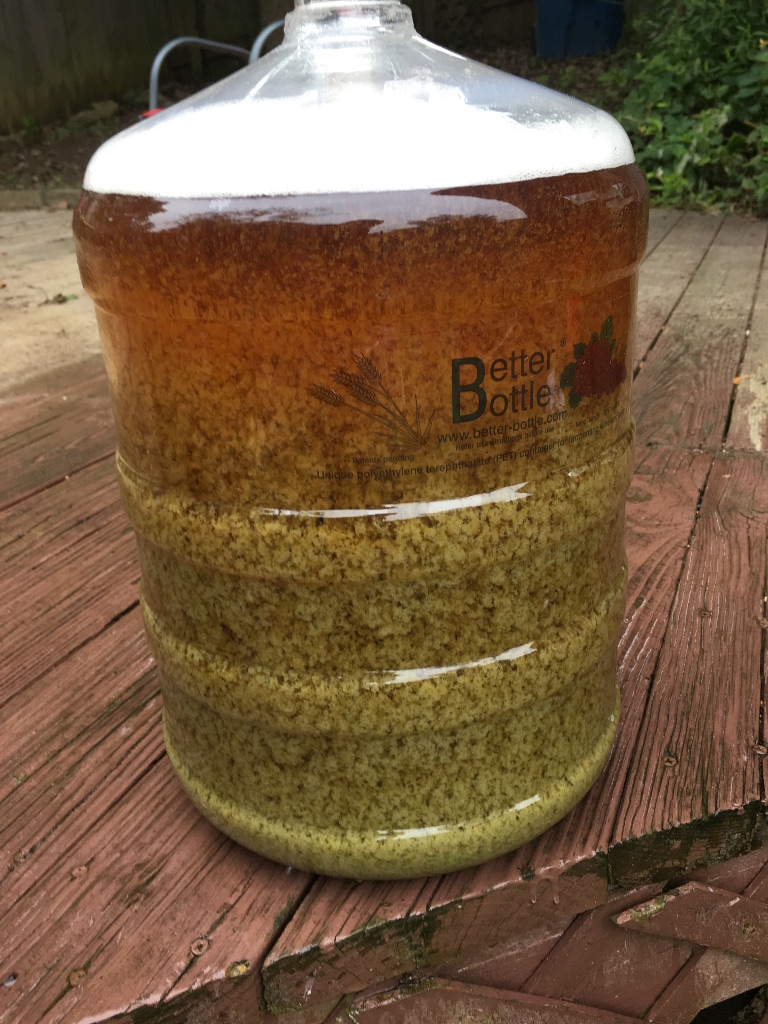 As of the finish of the brew day, I still hadn’t learned my lesson with blowoff tubes and carboys. This guy was a severe gusher, especially with the carboy as full as it was. Wanting a super clear beer, I hit it with gelatin on the 27th and three days later packaged the clearest, colorless beer I’ve ever made. Pre-carbonation, I get some big hits of diacetyl butteryness, but it’s pretty nice.

Last year’s gose was too good not to repeat. This time through I’m trying Gigayeast’s lacto blend (though Wyeast is noted in the recipe), and switching up the hop variety from saaz to spalt. Most recipes seem to use spalt or santiam, but last year’s beer was made from a Mad Fermentationist recipe that used saaz.

The brew day went perfectly and efficiency ended up much higher than expected. This is the first beer I’ve done using Brewer’s Friend, so I set the brewhouse efficiency a bit low. I suspect I saw 72%. Other than uncertanties in efficiency, I’m really liking the new brewing software.

After having a Sweet Baby Jesus from DuClaw, I decided that it would be an interesting beer to try to recreate. We’ve found that Costco has a great deal on high quality cocoa, and PB2 is a readily available substance for adding peanut butter flavor to beer, so everything sort of fell in line.

I ordered all of the ingredients from RiteBrew (non-affiliate, just noting how great they are). They have a wonderful form for putting grain bills together and will send the grains uncrushed so that I can not only use my mill, but I can also choose my brew day without fear of aging grain.

Early on brew day, I started a liter of yeast, which is the first successful yeast starter I’ve done with the stir plate. The last batch I attempted resulted in a broken flask. All went fairly well. I had some issues with the grain mill slipping, but ended up with a good crush. I need to put “adjust the grain mill” on my TODO list so it’s correct before a brew day for once.

The next morning, I woke to find a pellicle on top of the beer and not much yeast activity. We tend to have a strong lactobacillus strain in the air so this may not be the end of the line. If the yeast doesn’t liven up and take over, it may be a dud.